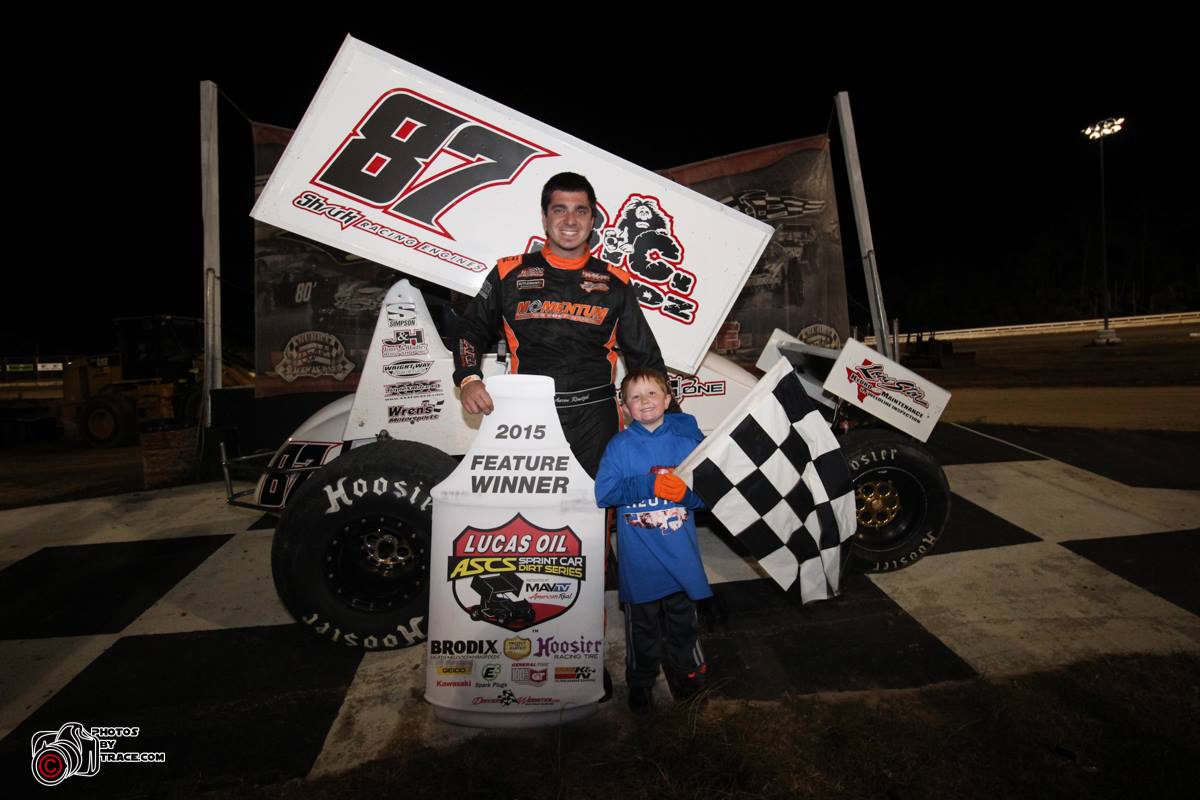 Reutzel’s sixth Lucas Oil ASCS National Tour Victory since 2014 the Clute, Texas driver took off from the pole to lead flag-to-flag for his third podium in four starts.

“I tell you what; this team has got some momentum right now. It just seems like we can’t do anything wrong,” said Reutzel. “I knew all we had to do was win the start, and once I did I just stayed around the tires. My highs are like 7,500RPM, I don’t think I went any further than half-throttle at anytime. I got too lapped there and I knew if I just followed them, I’d be alright. I was actually trying to let them get away from me but I just kept getting slower and slower like I was pulling them back to me.”

Nearly collected in slower traffic on the final lap, the caution displayed before Johnny Herrera could mount a charge on the B.C. Funds No 87.

Asked about the caution, Reutzel replied, “I really didn’t want to see that caution. That’s like the third race I’ve been leading on a rubber down track and had a caution on the white flag lap and just something happened, so I was just like well, here we go again, but I knew if I could just get the jump and roll into one and two, I’d be okay.”

Johnny Herrera’s second straight podium of the season, the MVT No. 45x made quick moves on the start to go from second to fourth by Lap 4.

“We kind of figured this thing was going to take rubber, and whoever was good off the front row, then that’s where it was going to be won from. Reutzel up there and wasn’t going to make any mistakes so I knew we were just going to be setting pace with him.”

Clicking his fourth podium finish in as many starts, Pennsylvania’s Mark Smith brought the Mach 1 Chassis No. M1 third after starting seventh.

“We were able to move forward, which is tough to do on a track like that. I didn’t have the tire I wanted on the Left Rear, but we had to get as far as we could get and third was it,” commented Smith. Asked about being locked into the redraw, Mark replied, “That’s cool, I like that.”

Events at the Bubba Raceway Park continue on Saturday, February 28 with races scheduled to begin at 7:30 P.M. (ET). Live PPV of the Lucas Oil ASCS spectacular can be found at http://www.racinboys.com.

Heat Races: (8 Laps, taking winners plus Top 11 in Passing Points to the A-Feature.)

The 2015 season will mark the 24th year of sanctioning Sprint Car racing for the American Sprint Car Series, which brings the best of Sprint Car racing to dozens of different tracks throughout the nation in both National and Regional competition.

Communications for the American Sprint Car Series is provided by Racing Electronics. All events are broadcast online at http://www.racinboys.com.