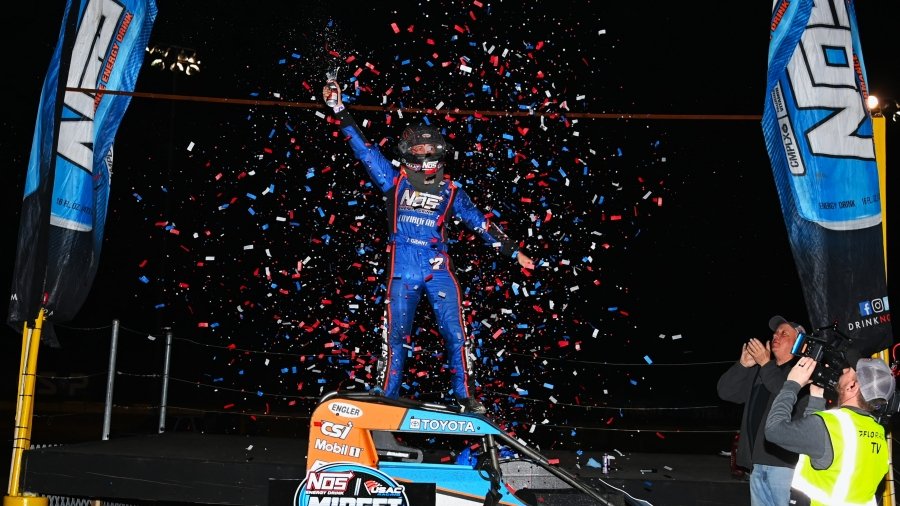 For Grant, life has been particularly good at the 3/8-mile D-shaped dirt track.  His most recent appearance at Bubba’s resulted in a third USAC National Sprint Car feature triumph in February of 2021, and this one in the midget makes him the fourth driver to win both a USAC Sprint Car and USAC Midget feature at the track, following Tyler Courtney, Thomas Meseraull and Chris Windom.

In fact, Grant’s four combined victories at Bubba’s equals him with Brady Bacon and Courtney as the winningest driver at the track in USAC competition.

His latest victory was the second occasion he’s won the USAC National Midget season opening race, also doing so during his first career series win in 2017 at the Southern Illinois Center in Du Quoin, which makes him just the 13th driver to win the first race of the year on multiple occasions.

However, out of all the statistics being tossed about, of upmost importance is the one which tells the story of opening night victories translating to championships.  It’s happened in three of the past four years in the division with Logan Seavey doing so in 2018, Tyler Courtney in 2019 and Buddy Kofoid in 2021.  Additionally, each of the past three champions (Courtney in 2019, Chris Windom in 2020 and Kofoid in 2021) had won features earlier in their title season at Bubba’s.

With this particular notch under his belt in his RMS Racing/NOS Energy Drink – EnviroFab – Response Management Services/Spike/Speedway Toyota, Grant is confident he can continue the trend.

“We’ve got the team, we’ve got the car and RMS Racing does a great job for me along with everybody that supports this 2J,” Grant said.  “The effort goes a long way; we’ve got a really good group around us.  We worked all last year building, and we were able to capitalize on a lot of that at the end of last year.  We went into the Chili Bowl with speed, into Florida with speed, and I’m just really happy and having a lot of fun.”

After taking 23 races to grab his first win with RMS in 2021, Grant put one in the win column ASAP this time around.  Grant chalks it up to a process that truly began to hit its stride late last season, which resulted in four total wins, including two in his last four outings.  Now, you can make that three out of five dating back to last November.

“It took me a long time to get my feet under me with a new team, and it was frustrating there for a long time last year,” Grant admitted.  “We were able to get there toward the end of last year, and to unload again with a lot of speed is really good.  This car was awesome tonight, and it was good from start to finish.  It felt really, really good there in the feature and I still had aways to go on my shocks if I needed to as the track was slickening up.”

Grant began his race from the outside of the front row but found himself mired in third at the line at the conclusion of lap one a car length behind pole sitter/leader Cannon McIntosh and a wheel behind Emerson Axsom.  However, things changed rapidly when Grant immediately dove to the bottom of turn one, sliding even-Steven with McIntosh through turn two and halfway down the back straightaway before emerging ahead on the top in turn three.

A tenacious scramble saw Axsom momentarily drop to fourth behind Kofoid on lap four, then retaliate with a double slider into turn three past both Kofoid and McIntosh to regain the second spot, a position he’d occupy throughout much of the remainder of the event.

By halfway, Grant’s one second lead began to shrink as he became stagnated in the throes of traffic.  As Grant attempted to navigate his way past the 20th place car of Floridian Frank Beck, Axsom closed the gap up right to the tail tank of Grant.  An evasive move by Grant underneath Beck in turn one on lap 16 negated all the ground Axsom made up.  As Grant gapped his rivals, Thorson pulled even with Axsom midway down the back straight, but Axsom escaped the fray by driving around the outside of Beck, while Thorson connected his front bumper with Beck’s back bumper, sending Beck into an unexpected drift with all continuing on.

With three laps remaining, Thorson gained an enormous amount of momentum off turn two and made an energetic run at Axsom entering turn three.  As Thorson pulled even, Axsom pushed up the track, and Thorson was able to scoot by.  The battled raged into the final lap as Thorson split low and Axsom high around 19th running Mariah Ede in turn one.  But, by the time Axsom reached turn two, his right rear tire began to deflate.

Up front, all alone, Grant had crossed under the checkered flag to score the victory.  Behind him, following contact to his rear bumper from a trailing car, Axsom glanced the outside wall and began flipping wildly in turn three.  He was able to crawl from the wreckage under his own power but gone was a potential podium finish which had quickly deviated into a crumpled racecar and bitter disappointment with a 12th place result.

Earlier in the evening, Thorson (Minden, Nev.) earned the 24th Fatheadz Eyewear Fast Qualifying time of his USAC National Midget career, tying him with USAC’s first ever feature winner, Gene Hartley, for 17th all-time.  After driving from his 6th starting position to a runner-up finish in two consecutive years during the Ocala opener, Thorson has now also finished inside the top-two in each of the last three season openers, including Friday night in his Reinbold-Underwood Motorsports/AME Electrical – MVT – Smith Titanium/Spike/Stanton SR-11x.

“We were really fast, and we had a good car,” Thorson stated.  “I felt like if I hadn’t gotten caught up behind some of the lapped cars almost every lap, I might’ve been able to give Justin a shot.  We’ve just got to get this thing a little bit better and have a little bit of luck with lapped cars, but, overall, I’m happy with it.”

Brenham Crouch (Lubbock, Texas) enjoyed the best finish of his USAC National Midget career, finishing 3rd in his Keith Kunz-Curb-Agajanian Motorsports/Toyota – TRD – Curb Records/Bullet By Spike/Speedway Toyota.  Crouch and team opted to use a softer compound in their impressive run from the 11th starting spot, besting Crouch’s previous best series finishes of 5th at both Lawrenceburg Speedway and Circle City Raceway during Indiana Midget Week in 2021.

“This was awesome,” an elated Crouch exclaimed.  “We struggled a little bit last year, and it feels good to start off on the right foot this time around.”

**Chase McDermand flipped during the third heat. Emerson Axsom flipped on lap 30 of the feature.