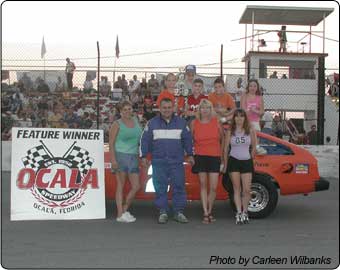 Ric Fort took a giant step toward winning the Coca-Cola Four Cylinder Bomber point championship as he topped the special 25-lapper for the class Saturday night at Ocala Speedway.

Steve Gallagher’s “Flying Tomato” Volkswagen was fastest in time trials at 19.183 and he started fourth on the re-draw next to A.J. Schreier who came into the race just 20 markers behind Fort in the standings.

Dan Sanderson had his Mini-Truck on the pole and jumped out to a quick lead with Joey Durbin, Gallagher, Schreier, Fort and Rocky Bowden swapping spots behind him. Sanderson would eventually get drop-kicked back several spots as Schreier, Gallagher, and Fort each took a turn at the point.

Just past halfway, Schreier got the lead and seemed to have his car back in the “groove” again, while Fort and Gallagher were tussling for second.

But with just a few laps to go, Schreier’s car began to miss and he started falling back as Fort took the point and raced to the win, just nosing out Gallagher at the line.

Sanderson made a late charge back up to third while Harold Barlup, in his first race driving a car formerly owned and driven by Bobby Valeo, took fourth. The engine on Schreier’s car came unglued coming to the checkered flag, but he held on for fifth although he lost more ground to Fort in the points race with just one week remaining.

Rocky Bowden was sixth while Chris Antis came from last on the grid to finish seventh. Tom Ellis, Richard Kuhn, and Dale Durbin rounded out the top ten.

After several “close” finishes in the past few weeks, Speedy Pete Close, Jr. finally found victory lane in the Steven A. Bagen Sportsman headliner. Close won the first heat while second heat winner William Edwards elected to invert the field for the feature and go for the bonus put up by the track if he could win from the rear of the field.

The first several laps were wild as Jim Higginbotham held the point with Tommy Brakeman right behind him. Close moved to the outside along with Edwards and Michael Mennenga and they raced side-by-side for several laps before Bob Masciarelli and Tom Posevac got hooked together coming past the flagstand. Point leader Masciarelli’s car rode up on Posevac’s car with the right front tire actually coming through the driver’s side window of Posavec’s machine. Fortunately, neither driver was hurt and both continued.

After the field was restarted, Brakeman moved to the point but couldn’t hang on as Close made an inside move with four laps to go to snare the lead and he never looked back from that point. Edwards nearly got the bonus, but had to settle for second as Masciarelli made a Banzai charge to come from well behind to nab third while Brakeman held on for fourth Just ahead of Mennenga. Posavec, Gary Wayne Crouthamel, Frank Buchanan, Higginbotham, and Jeremy Finegan completed the top ten.

The Diamond H Air and Heat Modified feature was another crazy one as Alan McCafferty brought his Central Florida Machine and Speed Silver Bullet into victory lane although he admitted he didn’t have the fastest car.

Rick Hall made a daring three-wide move early in the event and checked out on the field as his machine was dialed-in perfectly. However the old saying goes “they always run fastest just before they break” and that analogy fit Hall to a tee as his engine went sour with a handful of laps left and his full straightaway lead evaporated as he pulled into the pits.

McCafferty, running a strong second at that time, inherited the lead as the drivers behind him were into “WWE” mode with lots of slamming and banging going on.

David Baxley held on for a second place finish after some last-lap bumping with Raymond Vann that led to a brief post-race altercation and some no-to-kind words from Baxley in victory lane directed at Vann.

John Foerg took advantage of the late-race shenanigans in front of him to zip up to third at the finish ahead of Troy Robinson and Scott Millar. Rounding out the top ten were Kevyn Terry, Rick Brewster, Vann, Marlon Durbin, and Hall.

Tommy Roberts may need a Brinks truck to carry his winnings to the bank after a great run in the Thrifty Nickel Hobby Stocks.

After winning the second heat, Roberts elected to invert the field and go for the bonus now put up by the track to a driver who can win from the tail of
the field if he so chooses to start there.

While William Edwards came up just one spot short of the bonus in Sportsman, Robets was not to be denied in the Hobby Stocks. Roberts used his typical methodical style of working his was through the pack and the battle between Roberts, Jamie Dunn and point leader John Betts turned out to be the best race of the night.

Roberts eventually got to the front and never looked back as a late charge netted Moose Alderman second spot just in front of Betts who wrapped up the points title. Chauna Johnston celebrated her anniversary with a fourth place finish while Mark Mitchell checkered fifth.

Roberts not only won the first place purse money and the bonus cash, but also won the 50/50 raffle as well to cap a rather big night dollar-wise.

For the last several weeks, Kyle Maynard has had some kind of early-evening trouble that relegated him to the rear of the starting grid in the Ford of Ocala Pure Stocks. This week, Maynard ran a comfortable third in his heat, then moved from seventh on the start to grab the lead late in the going for a well-deserved win.

Bobby Carter put his Ford into second holding off a determined David Danielson and point leader Darren Dukes. Mike Fiddia elected not to go for the bonus after winning the second heat, but drew the invert pill anyway. He drove a steady race to round out the top five.

Despite the NASCAR Winston Cup race at Bristol being on TV, the races were held in front of a large crowd. Also in attendance were employees of Home Depot, Wilson Construction, All Pro Roofing, Rinker Concrete, and Double R Manufacturing as guest of the speedway.

Next Saturday will be the final Saturday evening of racing at Ocala Speedway and it will feature the TBARA Winged Outlaw Sprint Cars.